August 4, 2013 – NE Athlete Robin B. places 2nd place in her age group at the 30th Annual New London Hospital Triathlon on Lake Sunapee!  She finished the sprint triathlon in a time of 1:00:58.  Robin had a terrific day!!

July 28, 2013 – Congrats to NE Athlete Jeff D. for becoming New England’s newest Ironman!  He is the proud finisher of the 2013 Lake Placid Ironman, New York.  He finished with a time of 11 hours and 39 mins.  He placed in 67th place in his division!  What an awesome day for Jeff! 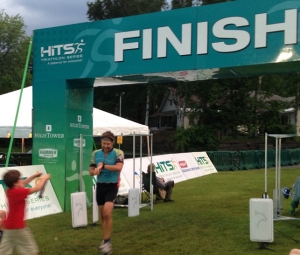 This was the culmination of so many months of hard work and training!  More details coming soon from Jim! Link here for the results.

June 21, 2013
Summer Solstice Sprint Triathlon, MA
Congrats to NE Athlete Jeff D. With a fun Friday night start and warm dry weather.  Jeff had a great race placing – 7th place overall in the race and 1st in his age group (30-34) with a finish time of 57:44! Link to results.

June 10, 2013
White Mountain 1/2 Iron Distance Triathlon, Franconia, NH
Jeff D. raced a solid race in the inaugural 1/2 Iron Distance Triathlon in Franconia Notch, NH.   This was his first long-course triathlon in a few years.  He completed the cold swim (which hovered in the low to mid 50s) and overall hilly bike and run course with a time of  5 hours and 30 mins. 55 seconds.  He placed 22nd overall in the race and 4th in his age category (30-34).  Highlights include having a breakthrough/solid performance on his run portion today, improved overall pacing, race nutrition and valuable feedback as he continues to focus training efforts for the Lake Placid Ironman in July.

May 26th, 2013
Cooperstown Sprint Triathlon, Sebago Lake, ME
Laura and Sean C. both raced in the Cooperstown Triathlon in NY.  Temperatures were near freezing around 41 degrees at the race start causing lake temperatures to drop into the low 50s, upper 40s thus cancelling the swim portion.  The race instead became a duathlon with a 2.5 K run to start the race in place of the lake swim.   Despite the cold temps and late change, wet pavement – Laura placed 1st place in her age category (40-44) with a finish time of 1:17:03 and Sean placed 5th in his age group (40-44) with a time of 1:11:34.

SKIING
January 31, 2013
I have been very busy to say the least – and hoping to update all results in the next 2 weeks. Running 2 nordic programs, plus coaching multiple athletes and training myself… super tiring, but fun!

Mitch H. had a great showing at the SASSI Memorial 5K classic race this past weekend at Black Mtn., Maine – Jan. 19th, 2013 – up against the toughest male high school xc ski racers in the state of Maine.  He placed 4th overall with a time of 14:44 – just 44 seconds out of 1st place on one of the toughtest race courses in Maine!  Way to go Mitch!  He is gearing up for the Eastern Cup weekend in Stowe, VT this weekend… I will be watching closely while coaching the York MS Ski Team in Jay, ME.

Laura raced in the Geschmossal – 10KM Classic Ski Race at Bretton Woods, NH – Jan. 21, 2013
A really fun mass start race despite very cold temps around 6-8 degrees at the race start.  I placed first my age group and 5th overall in the race with a time of 36:38.  Not too shabby considering much of my time these days is spent coaching – rather than training.

Wow!!  I couldn’t help but take this photo in front of the US Flag while in NZ – just before the opening ceremony/parade.  Here’s Ashley proudly representing Team USA and the US AF Academy at the ITU World Triathlon Championships Grande Finale in Auckland, NZ.

I will start by saying – what an amazing journey and experience to have been in New Zealand as a coach! A few days ago, I just returned from coaching Ashley T. at the ITU World Triathlon Championships in Auckland!  Arriving only a few days out from the start of the race with only a few days to train on the

Running to her fastest run split!

bike & run course as well as get a feel for NZ ocean – Ashley competed against deep international competition and in front of thousands of spectators – pulling out a solid race this past week!  In her Age Category-she was the first American Jr. Female athlete finisher and placed 30th in her age category with a time of 1 hour and 20 mins in the Sprint Tri Distance.  Her performance on the run portion of the course surpassed all of her personal goals!  She put down her personal best run time in a sprint tri with a time of 21:55.

Here’s a link to Ashley’s finisher’s video
Link to results.

July 28, 2012 – Congratulations to Jeanna W. for completing her first Sprint Distance Triathlon and placing 4th in her Age group.

Jeanna competed in the Mascomaman Sprint Distance Triathlon in Enfield, NH and finished with a time of 1 hour and 45 mins. Distances included a 500 yd swim, 14 mile bike and a 3.1 mile run.  According to Jeanna – “Participating in my first triathlon was a daunting proposition a year ago–I hadn’t been in the pool for over 10 years, and didn’t know the first thing about transitions. Laura developed a thoughtful, confidence building plan for me that greatly improved my swimming and overall endurance, so that on race day I had no trepidation. I knew I would finish as long as I followed all of her great advice. The preparation was key, and I have Laura to thank for that!” 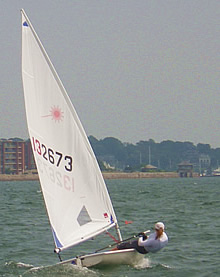 Laura and Sean traveled over to Central NY for a weekend of hot weather (temps were in the upper 80’s and low 90’s) and sweet racing!  Thanks to ATC Endurance and Mike B. for putting on a super fun event!  I had a blast despite way above normal May temps.  Otsego Lake was very pleasant to swim in with temps in the low 60’s – it felt balmy!

Sue C. reported a successful finish in her 25K Trail Run!  Way to go Sue!  More details to be updated short with a race report from Sue.

TEAM NEET athlete Sue successfully competes in the New England Tough Mudder Event in Mount Snow, VT.  Sue had a fantastic weekend competing in this event.  When I asked her to give a race report – she had this to say: “Great!!  I think there was 11,000 feet of climbing.  I completed all of the obstacles. The freezing water obstacles were the toughest. Took my breath away.   It was fun.  I was on a team with three guys. Two of them skipped a bunch of obstacles. The one that did all of them with me was totally wiped out. I was in the best shape. Made me feel good.”  Details about the race here.

NEET Owner – Laura Creagan competed in the first in the series of Maine TT Bike Races in Camden, Maine.  Laura placed 3rd overall in the women’s race and 2nd in her age cat. in the 15.2 mile bike race women’s.  “It was a spectacular day, sunny and beautiful.  I had solid tail wind on the way out on the course, and strong head wind on the return. Challenging, but very fun.  Very well organized race and nice support up at the Camden, ME TT Race.”  Laura competed with another local cyclist and friend Carole A. from Cape Neddick, ME who placed 1st in her age group.   Results here.

HUGE Congrats to Ashley T. who was just nominated to attend the United State Air Force Academy!  Also – Ashley has been named to Team USA to compete in the 2012 ITU World Sprint Distance Triathlon Championships in New Zealand!

The spring is already looking great for Team NEET!!

Last weekend I raced along side many other fellow Nordic Skiers in the 21 KM Bretton Woods Nordic Marathon to benefit the Ski Museum of New England (the cause seems somewhat ironic, but I will get to that in a moment).

Despite warm temps during the week leading into the event (for that matter the entire winter) and rain the day before – mother nature cooled down enough the night before to provide -2+” of fresh snowfall the night before and super-hard packed ice tracks to ski the entire course in.

Waxing was interesting, but not impossible!  I applied a light Rode klister-binder for my base (given the ice) and waited to apply my the topcoat upon arrival.  With temps in the upper-20’s (warming from the teens over night).  I opted for a little Rode Violet Klister with a light hard-wax coat to prevent ice/snow build-up.  Turns out my combination worked A-1 and I was as happy as one could be considering the challenging conditions.

For what it’s worth… I actually enjoy stressing over the wax.  It’s an interesting mix of chemistry, art and bravery.  Not to mention so many memories I have every time I smell klister being warmed by a torch… I won’t go there.  I realize that I’m different….

How did I finish? It was a mass start race (women & men starting together) which quickly funneled from 6 lanes into 2 in less than 100 feet (on ice).  I seeded myself up as far as I felt comfortable (probably should have put myself further up – in hindsight) and ended up placing  4th overall w/ a time of 1 hour 27 mins in the women’s race and 1st in my age group!  Not too shabby – considering how many actual days I had on snow and my valiant attempts to ski every weekend – despite summer conditions here in S. Maine.

For most of the course – good double-poling was key, but striding every up was also key.  Several people lost time on the ups, gave up and herring-boned – due to poor wax.  Thankfully – I was able to ski just about every uphill.

Back to my statement regarding the irony of the race beneficiary being the: “Ski Museum of New England”.  Why is this ironic?  As it is now March 19th and yesterday we hit 70 degrees (still not even Spring) – about 20-30 degrees above norm.  Plus – Southern New England posted the warmest/snow-less winter on record.  My  thought is that xc skiing and skiing in all of it’s beautiful forms –  may be heading to into the history books (or the Ski Museum).  Will skiing exist in 20 years?  Or just become a photo in someone’s photo album?  Will we sit around reminiscing about how amazing skiing once was?  Even writing these statements greatly sadden me as skier and as a winter sports enthusiast.

XC skiing is the one sport that makes you feel like you are flying over the snow, fully free.

I honestly hope that my above statements do not come true, but I am very worried after the winter of 2011/2012.

This site uses Akismet to reduce spam. Learn how your comment data is processed.